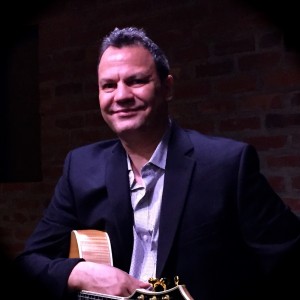 A native of Wichita Kansas, Gary Rosenak began playing guitar at age 14. He grew up listening to rock and R&B, but after discovering Wes Montgomery and John Coltrane when he was 19, he became immersed in jazz and developed an intense passion for improvised music. Gary earned a BA in Jazz Guitar Performance from Wichita State University, where he studied with Craig Owens and Jerry Hahn.

Upon graduation, Gary joined the Army as a musician, moving to Atlanta, Georgia. It was there he met Russell Malone, who encouraged Gary, and inspired him to develop his solo guitar playing. A member of the Dave Bass quartet, Gary had the opportunity to play with some of Atlanta’s top musicians including: Neal Starkey, Jeff Sipe and Delbert Felix. He also worked in Joe Grandsen’s trio, as well as playing other trio, duo, and solo guitar gigs. While in Atlanta, Gary studied with Gary Motley at Georgia State University, while teaching private lessons himself. After his Army service, Gary joined the Air Force’s Band of the Golden West in California.

While living in Northern California, Gary joined the house band at the Silverado Resort in Napa, where for nine years, he played jazz, R&B, blues and rock with a multitude of great Bay Area musicians including Dayna Stevens, Chris Amberger, Robb Fisher and Jerry Granelli, honing his skills as a very versatile musician.

Working out of Travis Air Force Base, Gary served as a bandleader and musical director for seven (small/large) ensembles, and also produced three pop/rock CDs for the Air Force, which were distributed in the United States, Japan and the Persian Gulf. Gary has performed broadly on an international basis in small rock bands, big bands, jazz trios, and as a solo guitarist. He’s toured extensively in the United States, Europe and Japan; also performing in Korea, Singapore, Turkey and Bangladesh. Additionally, Gary has performed in such prestigious venues as the Monterey Jazz Festival, the Dresden Opera House and the Blue Note, NYC.